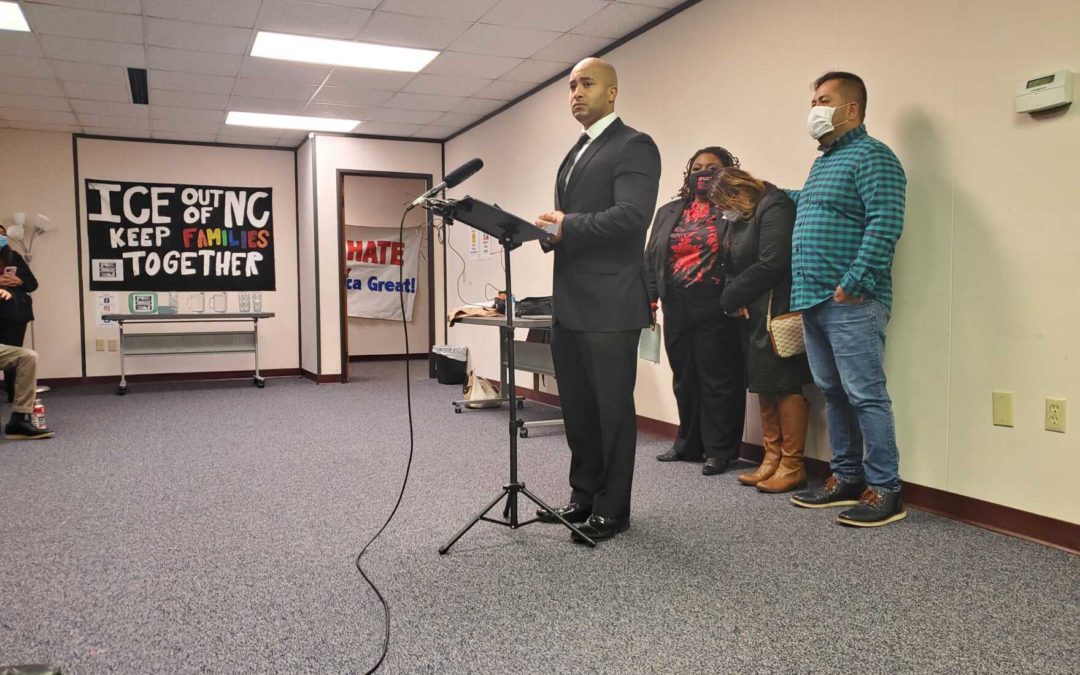 In initial reports, the media promptly accepted RPD’s justifications for the murder as “necessary” due to Mr. Turcios having a “knife.” However, Emancipate NC’s Dawn Blagrove and Kerwin Pittman, along with a community organizer and interpreter, Ivan Almonte, met with eyewitnesses to the incident and reviewed video recordings.

After the press briefing, the News & Observer reported:

A week after Raleigh police fatally shot a man following a crash on Interstate 440, activists released new details they say they’ve uncovered about the shooting. Community advocates from Emancipate NC said 43-year-old Daniel Turcios, a native of El Salvador, was severely disoriented by the crash, in which his car flipped multiple times. He was rendered unconscious in the crash for some time and had a limited comprehension of English. At a news conference Tuesday, they pushed back on the idea that Turcios may have been intoxicated, as Police Chief Estella Patterson said last week 911 callers had indicated.

Blagrove acknowledged that Turcios “had a very small pocket knife” but emphasized that did not justify police shooting him.

“He was walking, tased, falls to the ground … and is murdered in front of his family,” she added. “That is the story here. That is what matters.”

Addressing reporters in Spanish, Rosa Jerez, Turcios’ wife, said her children were yelling at the officers not to kill their father. “They murdered him in front of my children, in front of me,” Jerez said in Spanish. “He wasn’t doing anything to (the police.) I told them to leave him alone because he wasn’t doing anything; they didn’t listen to me! And he didn’t understand anything they told him. My children screamed at them not to kill him. They murdered him as if he was a dog. They didn’t care about him at all.”

WUNC reported from the press conference:

Advocates for the family and for police reform in North Carolina held a news conference Tuesday morning to address the shooting.

“Even if the first shot was warranted — which, again, we do not concede by any stretch of the imagination — the significant delay in the first and the subsequent shot, should warrant more than an internal affairs investigation. It should warrant a criminal investigation,” said Dawn Blagrove, executive director of Emancipate NC.

Kerwin Pittman, Emancipate NC director of policy and program, added that Turcios was likely disoriented from the car crash that preceded the shooting and spoke only limited English. Pittman says it’s likely Turcios did not understand the commands being shouted at him by Raleigh police officers.

Raleigh Police Chief Estella Patterson said Turcios wielded a knife that officers demanded he drop. Blagrove said it was a pocket knife and that focusing on the knife distorts the narrative.

“What we don’t want to do and what we’re not going to do is focus on this pocket knife. … We are not going to continue to feed that narrative,” Blagrove said Tuesday morning. “After already sustaining a severe head injury, he is tased, falls to the ground again and then tries to get back up, and is murdered in front of his family. That is the story here. That is what matters.”

Emancipate NC stands with Mr. Turcios’ family and all people oppressed by police violence. The mainstream narratives that criminalize Black and Brown people must be dismantled and transformed–so that we can all get free.