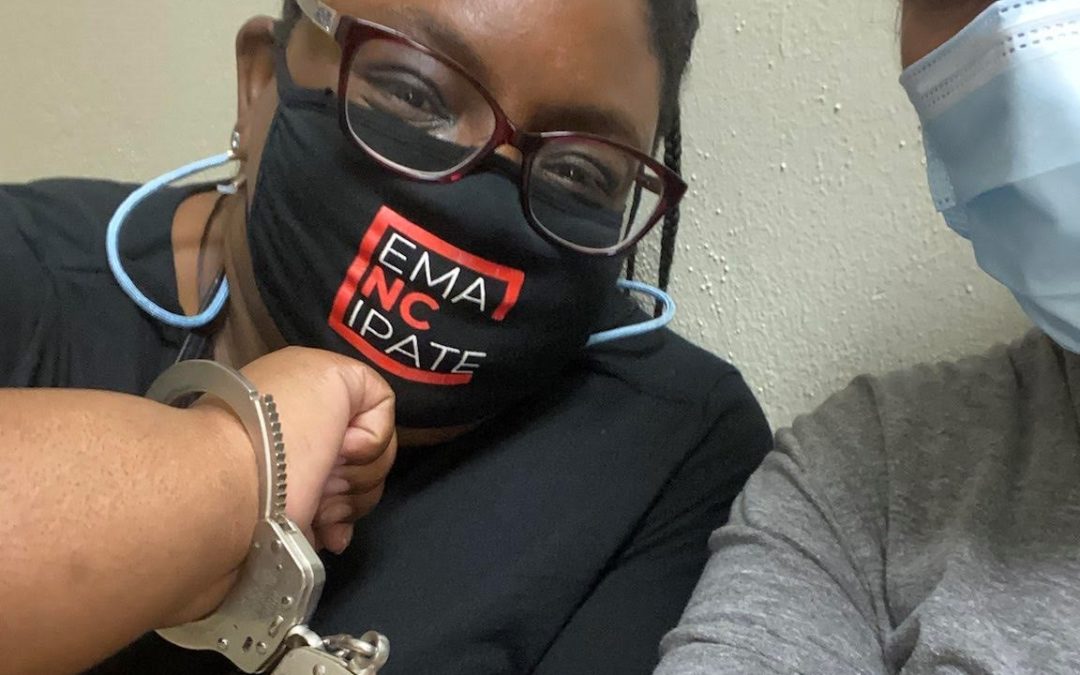 On April 21, Pasquotank County sheriff’s deputies shot and killed Andrew Brown Jr. Since that date, Emancipate NC staff members, Board, and Justice League Fellows have been on the ground–protesting, bailing out arrested people, coordinating with NLG Legal Observers, and providing material support.

Brown, a Black man, was sitting in his car when officers shot him four times in the arm and once in the back of the head (according to an independent autopsy on behalf of Brown’s family).

Protests in Elizabeth City have been ongoing since Brown’s death. Family members, friends, and other grieving community members are calling for justice and transparency. The body camera footage has not been released as of May 11.

The Elizabeth City police and county government are responding with excessively restrictive measures to curb and discourage protesting. Mayor Bettie Parker declared a state of emergency, instituted a curfew between 8:00 p.m. and 6:00 a.m, and implemented a policy that requires protesters to apply for a permit to assemble at least 15 days before a gathering. (The curfew has since been shortened; it is now from 12:00 a.m. to 6:00 a.m.) These measures violate the constitutional rights of protesters and Elizabeth City residents. All of these actions have been taken despite the peaceful nature of the protests. A video by Emancipate NC’s Kerwin Pittman shows protesters near Camden Bridge in Elizabeth City.

According to Elizabeth City police, many protesters were undeterred by the curfew. Police have responded by arresting peaceful protesters. Jon Farina, a journalist, was also threatened with arrest while reporting at the scene.

This response by Elizabeth City government and law enforcement is unwarranted and unconstitutional. Emancipate NC, with ACLU of North Carolina and the Lawyers’ Committee for Civil Rights Under Law, wrote a letter to Mayor Bettie Parker, Police Chief Eddie Buffaloe, City Manager Montré Freeman, Assistant City Manager Angela Judge, and City Attorney William H. Morgan, Jr. detailing the unconstitutionality of the curfew and the permit policy and the inappropriate designation of peaceful protest as an “emergency.”

The letter notes that it is “deeply troubling that this permitting scheme was implemented in direct response to protests decrying the killing Andrew Brown Jr. at the hands of police. This suggests that the permitting scheme is not viewpoint- and content-neutral in origin, as required by the Constitution. There was no ‘emergency’ justifying the imposition of a permit or notice requirement on demonstrators. The circumstances around the City’s hasty adoption of a sweeping permitting scheme raise concerns that it will be enforced most vigorously against people participating in protests that convey messages that government officials deem offensive or disagreeable.”

Elizabeth City is a community in mourning.

“This is a small community,” Blagrove is quoted in a recent Slate article, “Very few of [the protesters] do not know Andrew Brown or someone connected to his family personally, and their pain is compounded by the fact that their officials and county commissioners have taken such an antagonistic position toward transparency, toward the community.”