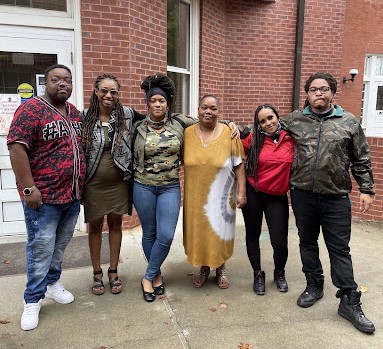 Photo depicts Lester Kearney’s family, along with Advocate Cierra Cobb, outside of the Warren County Courthouse in October 2021.

Lester Kearney is an innocent Black man facing the death penalty in Warren County, North Carolina for the 2018 murder of an elderly white woman.

In actuality, the woman was killed by a white man, Kevin Munn, who had previously worked labor at her home. Mr. Munn took a plea to Life Without Parole in exchange for falsely implicating Mr. Kearney as a co-defendant, at the explicit suggestion of SBI agents.

Now, Mr. Munn’s conscience won’t let him send an innocent man to death. He has refused to testify against Mr. Kearney. So, the DA is now going to seek the death penalty for Mr. Munn, too.

This was the scene, last week, when Emancipate NC Advocate Cierra Cobb traveled to court in Warren County to support Mr. Kearney’s family at pretrial hearings on evidence in advance of a January 2022 capital trial date.

As a child, Lester was mischievous. Very smart. Loving. He was a loving child. He was a good boy. I didn’t have much problem with him as a child, no more than most boys do.

[This trial] saddens me. You know, it’s hard, every day we get up and smile and try to have a normal life, knowing that these people are trying to take my child away from me, and not only take him away from me, but actually give him the death penalty. It leaves an empty feeling. The only way I can describe it, is a mother who has miscarried or lost a child. It is a gut-wrenching feeling.

You got to be supportive as you can, all mothers and children go through some things, but once something like this happens, all the rest of everything else is put behind you, you don’t think about the arguments or problems you had. You think about the good times and you try to be as strong as you can be. I do a lot of praying and a lot of crying in silence. I try not to let everybody see me. I could be laying in bed going to sleep and the tears will flow.

Is the justice system fair? No. no. It is rail-roading Lester. It’s framing him. Lester is innocent. There is no other way you can say it. Because of who Lester is, they feel like Lester don’t have no support or people behind him and they can take him away and do what they want. We’re not going to stand for it. We’re going to fight until we die. I’m not going to let them take Lester away from us with us

This is a Black and white thing. I don’t care what no one else thinks. We are not free. No Black person is free. We are only as free as the white man will let us. As soon as you do something to mess it up, it is taken away from you. We work hard. But it’ll be gone, it ain’t yours. Your life ain’t yours. You are only as free as the white man gonna let you. If you mess anything up, you’ll see you’re still a slave, you’re just another n*****

This is one of the worst things that could happen. Since we found out about each other, we haven’t stopped talking.  I came all the way down here from New York to support my brother.

It’s the worst feeling ever. We don’t have no control over it. To know he didn’t do it. So, so powerless.

They want Lester, they just want Lester. He has a history. He doesn’t care what happens. He’s going to make sure Lester goes away forever. There’s not any concrete evidence any more. Nothing that has been happening is fair.

In this case, he has not had a speedy trial. He hasn’t had the opportunity to be afforded a bond. The jurisdictional change has not been properly processed. Four years to get to resolution is unjust and unfair. Our community always suffers from this.

I was a correction officer for many years. I’m a retired sergeant from the sheriff department. I know the process that they are going about is wrong. A lot of things they are doing is to appease the people that are accusing him of the crime. Not the justice of the courts or the law. They are not following the law. They are trying to appease the people claiming he did something. That is not fair.

I’m tired. I love Lester. Lester is my heart. I love him and I wish the best for him. I don’t think he did this. Because of the trouble he’s been in, he got a bad rap and they have to blame it on somebody. So they say, hey let’s get him. The family [of the deceased] says, “Our heart is crying out, who did this to our grandma, our mother? We need our hearts to be satisfied!”

But you need the right evidence and forensics. But if you don’t have it, don’t beat around the bush, don’t prolong it.

We don’t just throw the race card out there, but it’s a fact, he’s a Black young man, and they want to destroy him, whether he’s guilty or not. We got him locked up, let’s stick it to him. He is guilty before he walked in the courtroom. They don’t care, they don’t want him to have justice, they just want justice for them, let’s keep it real, they don’t have evidence. The officers released his photo to the media before they did a line-up. When you release someone’s photo to the media, that is tampering with evidence. If the man sees this on the news, it is in his mind. You’ve tainted this case. You cannot crucify a man because of his past history, he could be changing his life. That’s God. God exists. Show us some evidence. I can accept evidence. If you show me evidence, ok.

This case is a true example of injustice. The “innocent until proven guilty” does not apply to the BIPOC community in America. All of the objective evidence points to Lester’s innocence. The SBI agents were the ones who suggested that Kevin Munn implicate him and Kevin Munn did so to try to save his own life because they were going to seek the death penalty against him unless he testified against Lester. Lester’s phone was at his girlfriend’s house being actively used at the time of the crime. There was no proper line-up after the DA leaked Lester’s photo to the media and the survivor saw it on the news. The survivor had been hit on the head and had memory problems. The survivor’s description of the person was that they didn’t have tattoos. Lester has a lot of tattoos.

This is what happens when a DA is more concerned with winning than doing justice and when a DA doesn’t see humanity in a Black man or his family and just sees him as a “criminal.” This is what racism in the criminal justice system does. It makes people forget to see the humanity behind a person. Emancipate NC is on the side of the people. We stand with Lester and his family.