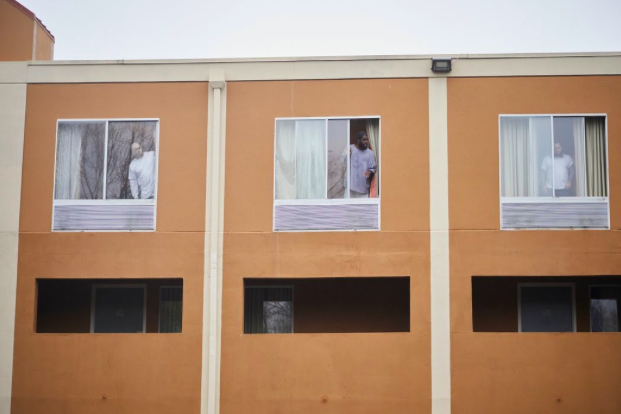 This image, depicting Durham’s COVID motel, the Quality Inn, was borrowed from the Indy Week. The photographer is Jade Wilson.

On January 22, 2021, the News and Observer reported that North Carolina prisons planned  to expand their post-release quarantine program, despite community concerns about the legality of the operation. The N.C Department of Public Safety (DPS) launched a pilot COVID-19 quarantine program a few months ago, where men being released from prison would stay in a Durham motel. The program houses men released from prison who have had potential exposure to COVID-19 and who have nowhere else to safely quarantine.

One hundred ninety-one individuals have successfully completed their quarantines at the Durham motel. Eighty-three residents were on site as of January 14. The state plans to expand this program to include a DPS facility in a new location that would house women. This facility would be in western North Carolina’s Buncombe County, recycling a building that previously housed a drug and alcohol treatment program for women who were on probation. Similar to the program in Durham, the building will house the women in quarantine for 14 days to ensure that they are able to safely return to their home counties COVID-free.

Even so, the expansion is happening within an environment of community concern. Volunteers from the Rose of Sharon Catholic Worker have reported that the men at the Durham motel are experiencing unsanitary conditions, insufficient medical supplies, and ongoing fear of contracting COVID-19. Residents echoed these concerns and described bed bug infestations, inadequate access to medication and personal protective equipment, and uncertainty over how long they will be forced to stay in the motel involuntarily.

Our team at Emancipate NC  released a letter on Friday, January 15, questioning the legal authority of the state to detain released individuals in this motel model. This letter was directly to the Department of Public Safety, and was also sent to Durham county and city officials.  In the letter, we noted how we represented Reginald Cunningham, a released person  who spent 7 weeks in the Durham motel. Even though Cunningham avoided contracting COVID-19 for the past year in state prison, he contracted the virus while at the motel.  In the motel, he was denied access to his prescribed psychiatric medicine beyond the 14-day supply and was later arrested and re-incarcerated in jail for “breaking quarantine.” He was arrested at 5 weeks, 3 weeks longer than his intended stay.

Thanks to Emancipate NC’s advocacy, he has since been released. However,  this is indicative of a larger problem. The average length of stay at the motel is 18 days and multiple residents have been detained for a month or longer. Residents have to remain in the motel longer if a home plan has not been identified and approved or if the resident declines a potential placement and a new home plan has to be found.

Emancipate NC argues that the state has no legal authority to involuntarily confined residents in the motel beyond the initial 14 days. The motel should not be a punitive tactic to address homelessness and prolong incarceration, but rather DPS should expand voluntary and humane housing options for released individuals. The motel should be used to house people who need a roof over their head, especially during a pandemic, but it should not mimic the deplorable, inhumane conditions of the carceral system.

Read more in the Indy Week