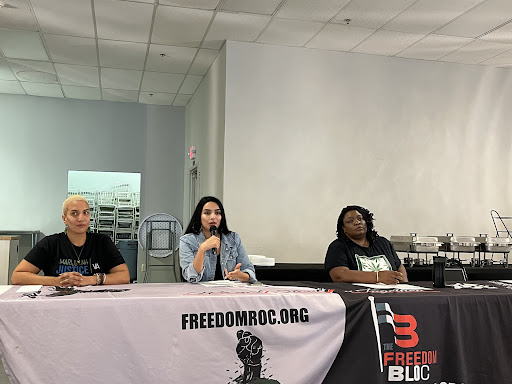 Last week, Dawn Blagrove traveled to Akron, Ohio for a Week of Action as part of Emancipate NC’s membership in the Black Freedom Collective, a project of Community Change. The Week of Action honored the memory of Jayland Walker, who was murdered by police during a pretextual traffic stop.

The local coalition, the Freedom BLOC, calls for the establishment of an independent Truth and Reconciliation Committee to investigate Jayland Walker’s murder, the prosecution of all officers involved in the murder of Jayland Walker, and the release of all peaceful protesters from jails and holding institutions. As part of the week’s events, Dawn provided legal support during a Housing Justice event and conducted a “Don’t Plead to Weed” training with Chelsea Higgs-Wise from a Virginia group called Marijuana Justice.