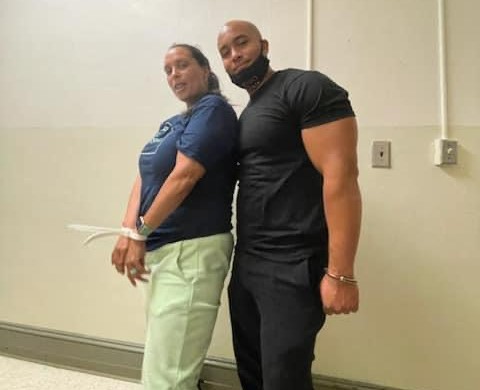 Photo depicts Kristie Puckett-Williams and Kerwin Pittman in handcuffs, but undaunted, in Elizabeth City, NC, after being arrested in the course of protests.

These arrests occurred while Kerwin, Kristie, and the journalists were working during protests after District Attorney Andrew Womble declared Andrew Brown’s murder by police to be “justified.” Kerwin has spent weeks in Elizabeth City, supporting the local people as they demand justice for Andrew Brown, who was murdered by sheriff’s deputies on April 21.

Kerwin was walking toward the jail to bail people out when he was arrested by police. He stated: “I was targeted specifically. This is nothing more than them trying to discourage people from coming out.”

The USA editor stated: “Being taken into custody by police will not stop [our journalists] from doing their jobs for readers. . . . [They are] trying to be the eyes and ears.”

The events were covered in the News and Observer.