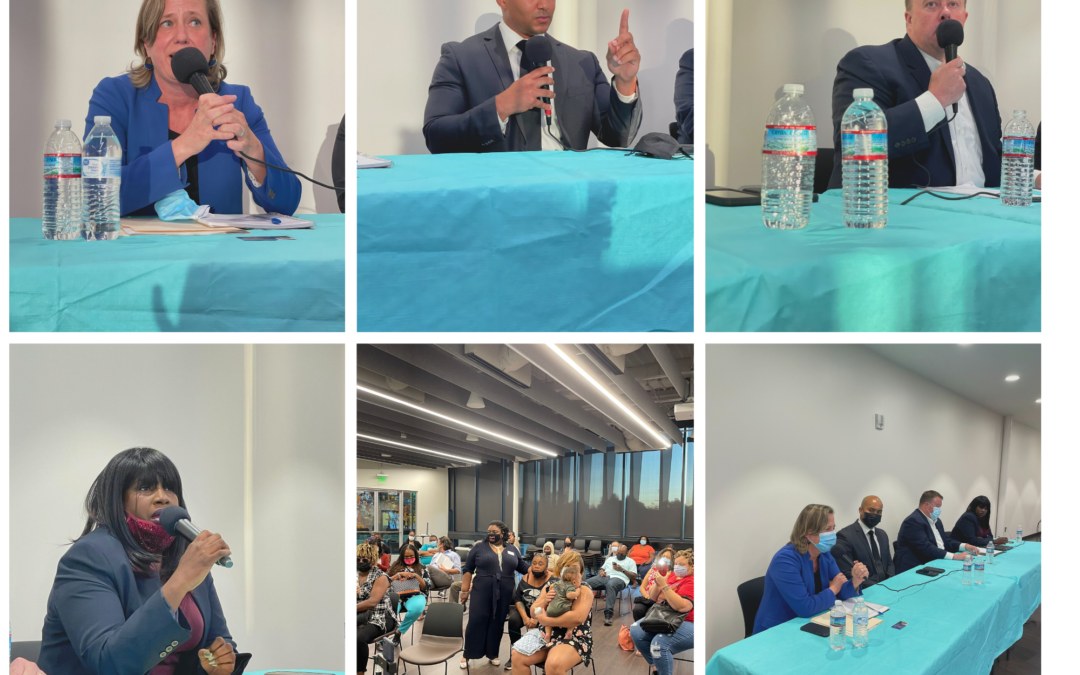 The News & Observer described the event as “emotional,” as multiple directly-impacted community members turned out to ask D.A. Freeman tough questions about her decisions on cases ranging from police shootings to the reliance on lying confidential informants to her office’s alleged refusal to provide her email address to the public.

Dawn Blagrove moderated the panel in a “speed dating” style, asking each participant to answer “yes” or “no,” addressing subjects that Emancipate NC believes can have a monumental impact on the disparate outcomes in our criminal justice system, if they are addressed.

Lorrin Freeman: No, because it would be “setting aside the will of the jury and the judge and the system”

Damon Chetson: Yes, we should go back and look at cases with exceptionally long sentences to make sure they comport with justice; the 8th Amendment prohibits cruel and unusual punishment in the USA. People are serving outrageous sentences that were done by the Wake County DA Office in the last six years.

Kerwin Pittman: Yes, we should definitely have a mechanism to go back and review these cases; the question is why we don’t have it? It needs to be implemented as soon as possible.

Kimberly Muktarian: Yes, Too many resources are placed in the penal system; We have a duty to not lock our men away, but to let them thrive.

Lorrin Freeman: No, we need to be careful about continuing to bring charges that really disadvantage people because they are poor.

Damon Chetson: Yes, pretextual traffic stops are offensive. We must demand that police have a real reason to stop a car, not a fake reason.

Kerwin Pittman: Yes, the charges should be dismissed, period. I was pulled over for having my windows tinted, even though they were legal; the police were hoping to be able to search my vehicle and this happens to a lot of Black and brown men.

Kimberly Muktarian: Yes, it will stop the degradation of our men; you may call them “pretextual,” I call them “consent to lynch.”

Lorrin Freeman: No, here in Wake County we have diverted marijuana charges to send people to education and treatment.

Damon Chetson: Yes, low-level misdemeanor charges are dismissed in other counties, such as Mecklenburg and Durham, and the diversion programs in Wake are too restrictive and expensive.

Kerwin Pittman: Yes, when the DA stops prosecuting low-level marijuana, the police will stop charging people, and we can reimagine public safety

Kimberly Muktarian: Yes, I’m in favor of ending the bombardment of racism when it comes to low-level offenses; once NC makes marijuana legal, will they fix everyone’s record?

Lorrin Freeman: No, because such resources to look at police misconduct “is not where we are in reality, so I do not believe it would help.”

Damon Chetson: Yes, there should be a walled-off group of prosecutors to investigate and prosecute police officers who commit abuses or who are corrupt. I represented Kyron Hinton; the prosecution of individuals who were responsible for his beating and mauling was insufficient.

Kerwin Pittman: Yes, The district attorney’s office is always upholding what the RPD do, misconduct or not. No RPD officer charged in Kyron Hinton’s case; no shade, but I’m calling a spade a spade.

Kimberly Muktarian: Yes, absolutely, I think we have to have a group of people who pay direct attention to corruption in the criminal system, and that includes police, and I think we should have community liaisons

Lorrin Freeman: No, we are working to totally revise our pretrial practices and we are trying to get down to making sure that only those people who need to be held for public safety reasons or otherwise or held

Damon Chetson: Maybe, you can end up with a worse system [than cash bond], however, money should not be the reason someone is kept in jail. In Wake County, we have people with $1,000 bonds who cannot bond out who are clearly nonviolent. Wake was least effective at lowering jail populations during COVID, unlike Durham, Orange, and Chatham counties.

Kerwin Pittman: Yes, Let’s take the alternative because people are being criminalized for being poor; we have loan-sharks who are bail bondsmen; you have people sitting in jail on a $500 bond, a $300 bond. This system is disgusting.

Kimberly Muktarian: Yes, I support the end of cash bail. What you have is poverty criminalized and we have to stop having people broken by this system pay twice with their lives. We have more people in jail on drugs than in rehab.

Lorrin Freeman: No, sentencing enhancements are important for public safety in appropriate cases.

Damon Chetson: Yes, I will keep this one short.

Kimberly Muktarian: [did not have opportunity to answer]

Here are the final highlight reels of the event: