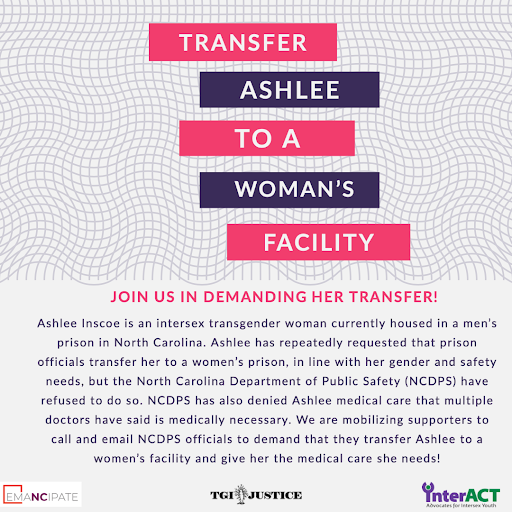 Ashlee has repeatedly requested that prison officials transfer her to a women’s prison, in line with her gender and safety needs, but the North Carolina Department of Public Safety (NCDPS) has refused to do so. NCDPS has also denied Ashlee’s request for medical care that multiple doctors have deemed medically necessary to manage her pain and cancer risk, with prison officials falsely claiming that the procedure is gender-affirming surgery and isn’t medically necessary. Advocates warn that NCDPS is failing to meet Eighth Amendment and Prison Rape Elimination Act (PREA) requirements to provide incarcerated people with necessary medical care and protect them from harm.

Check out the toolkit and take action for Ashlee: https://bit.ly/TransferAshlee

The coalition has sent a demand letter to NCDPS Commissioner of Prisons Todd Ishee and his counsel, calling on NCDPS to transfer Ashlee to a women’s facility and to approve the ovarian surgery that she wants and needs. (see letter and NCDPS’ reply). The organizations are also mobilizing supporters for a call-in action to apply pressure in support of these demands.

When Ashlee was incarcerated in California, she was housed with women, but NCDPS placed her in a prison for men and is refusing to correct the error. Ashlee is currently housed in a dorm with over 80 men, where she experiences daily harassment and the threat of sexual abuse. A prison doctor and several officials at the prison have recommended that Ashlee be housed in a women’s facility, but higher-level NCDPS officials refuse to approve a transfer.

While transgender, gender-variant, and intersex (TGI) people will never truly be safe while in prison — and while the groups affirm that prison is an inhumane environment for all human beings — Ashlee’s mental and physical well being depend on being housed in a women’s facility so long as she remains incarcerated.

State prison officials are also denying Ashlee the necessary medical care she has requested. Ashlee suffers from ovarian cysts, and multiple doctors have agreed that removing her ovaries would reduce her pain and lower her cancer risk. Ashlee actively desires this surgery, but the state prison Utilization Review Board has refused to approve it on the absurd basis that because Ashlee is housed in a men’s prison, she  cannot have ovaries, and therefore she could not possibly require a surgery to have them removed. NCDPS’s refusal to acknowledge that Ashlee is a woman has led them to likewise reject the reality of her intersex body, resulting in a denialof needed medical care that puts her health at serious risk.

TGI Justice Project, interACT, and Emancipate NC support Ashlee’s demands to be housed with other women and provided with necessary medical care as the Eighth Amendment requires.