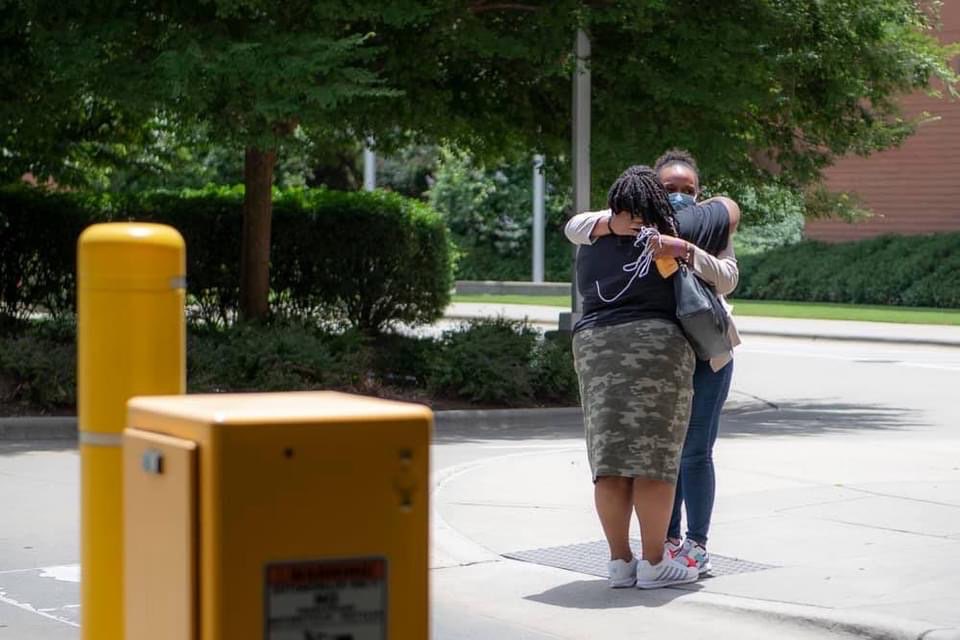 Photo depicts Dawn Blagrove and Kathy Greggs embracing outside of the Wake County Detention Center after Kathy was released from custody on June 29, 2021.

Raleigh, NC: On June 29, 2021, at the Wake County Detention Center, Wake County Magistrate Judges Powe and S. Jackson interfered with a defendant’s statutory right to an attorney at the setting of bond, in violation of North Carolina law.

Earlier that day, Emancipate NC client, Kathy Greggs, president and co-founder of the Fayetteville Police Accountability Community Taskforce, was arrested on charges of second degree trespassing at the General Assembly while attempting to give public comment on the proposed state budget. Greggs telephoned Attorney Dawn Blagrove and asked her to meet her at the jail to represent her at the bond hearing.

When Attorney Blagrove arrived at the Wake County jail and identified herself as Ms. Greggs’ attorney, noticing her intent to appear at the bond hearing on Greggs’ behalf, Magistrate Powe forbade Blagrove from entering the magistrate’s booth or communicating with her client.

This incident follows an incident in November 2020, when Magistrate S. Jackson refused to provide a different Emancipate staff-person with bond receipts, taking $10,000 in cash and refusing to provide any receipts in exchange, necessitating later intervention and apology by the Chief Magistrate.

Emancipate NC calls upon Wake County Magistrates’ Office to issue a public statement affirming the right of defendants to be represented by counsel at bond-setting and to follow that procedure henceforth.

A link to our letter to Chief Magistrate Graves and Chief District Judge Sasser is here.