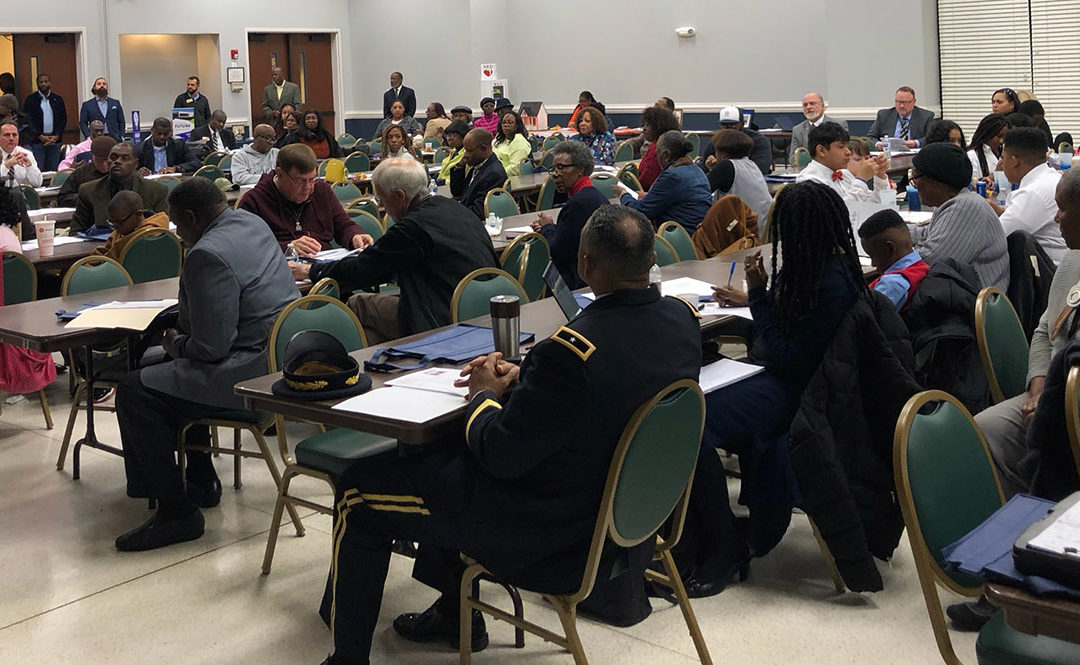 On Thursday, January 23, 2020, over 100 residents gathered at Wilson Community College to learn more about the school to prison pipeline in Wilson County, including strategies for better supporting youth of color. The event was entitled “Juvenile Injustice: Pathways to Prison,” organized by Emancipate NC, CAPE, and the NAACP of Wilson County as part of a grant funded by the Vera Institute of Justice to combat rural incarceration in North Carolina.

Professor Erika Wilson, from the UNC School of Law, delivered the keynote address about strategies for reducing the incarceration of people of color in Wilson, especially Black people. She pointed out challenging statistics showing how Black students in Wilson county are expelled at a much higher rate than their white peers. Professor Wilson also discussed how in Wilson County, Black people are more likely to be arrested for certain crimes, even though white and Black people commit those same crimes at similar rates. She pointed out that these disparities are grossly unjust and unwarranted, and there is much that can and should be done to end them.
Professor Wilson passionately asked residents to end harmful narratives that normalize the over-incarceration of Black and Brown bodies. She closed by detailing key strategies for reducing incarceration that are already working, including ending cash bail and the implementation of restorative justice programs.

General J.R. Gorham then inspired attendees with his personal story of growing up as one of 11 children of sharecroppers, and his rise to the military and to become an author and motivational speaker.

We were thrilled to be joined by a local public school children’s gospel choir, as well as many elected officials, including the Mayor of Wilson, the Sheriff of Wilson County, and State Representative G.K. Butterfield.

Our work in Wilson County is bringing new partners into the movement to end racialized mass incarceration. One attendee expressed that she was grateful to Emancipate NC for bringing the policy ideas related to bail reform and “cite and release” to Wilson. She told us that it had never occurred to her that someone could be arrested and not be required to post bail – but now that she knew, she fully supported our efforts to end it.