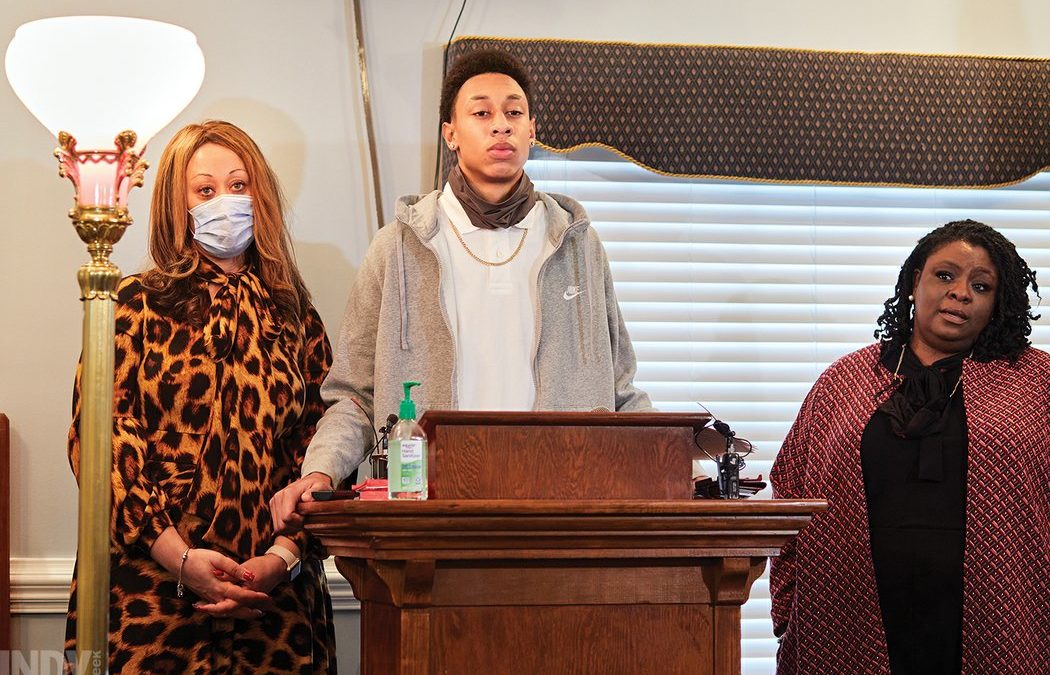 On January 30, 2021, Fuquay-Varina Police unreasonably handcuffed and detained Malcolm Zigler, a 14 year old Black boy, for “stealing” a dirt bike that he purchased.

Zigler started working on dirt bikes to expand his passion for riding about a year ago. By tutoring other kids on how to fix their bikes, mowing lawns, and washing cars, he transformed his hard work into $900 of savings. He invested this money into a used motorbike from Facebook that he refurbished and repaired himself. Once the bike was restored and ready for sale, Malcolm posted the motorbike on Facebook Marketplace.

Within days, a person contacted Malcolm about purchasing the bike. Malcolm’s parents approved of his business, as he never interacted with potential customers without a parent home, so this transaction was no different. Even so, the individual who contacted Malcolm about the purchase believed the bike Malcolm was selling was, in fact, their stolen bike. After agreeing on a price, the prospective buyers/alleged owners of the bike told Malcolm they were going to the ATM to get cash for the transaction.

Malcolm was obviously unaware that the bike was previously stolen, as he purchased it legitimately and obtained a bill of sale. Police reported that it was stolen from Harnett County and after the owner spotted it on Facebook, she approached Malcolm as if she were planning on buying it from him and called the police.

While the woman purportedly went to the ATM, Malcolm waited outside with a white friend who was also 14 years old. A short while later, two police cars arrived at Malcolm’s home and within seconds Malcolm and his friend were placed in handcuffs, searched, and shoved into the back of the police car as the officers repeatedly ignored his pleas to get his father and get proof that he’d paid for the bike legally.

Twice, Malcolm asked the police why they were detaining him. At first, the officer did not respond, however, the second time, the officer replied that he was being detained for possession of stolen property. Malcolm then asked for his father, who was a mere steps away in his family home, but was denied.

Even so, Malcolm was thoroughly searched by the officers who confiscated everything that he had on his person, including his cell phone. His white friend, after telling the officer he was not involved with the sale, was quickly released and reportedly not searched.

In body camera footage reviewed by Malcolm’s mother, Ty Ziglar, and in review by Wake County District Attorney Lorrin Freeman, the officer shut the cruiser door on the frightened teenager and told the second officer that Malcolm had been “running his mouth.”

According to Ty, while the first responding officer remained in the car and Malcolm remained cuffed in the back seat, the bike’s former owner approached the Zigler home and confronted her husband by saying “Next time you want something, earn it.”

During a Friday press conference with Emancipate North Carolina, an emotional Ty could be heard saying “He was doing his best to clearly communicate to you his desire for his dad and the bill of sale to prove his innocence, you were never there to hear my son. You were only there to arrest him. If the cop could hear the white teenager’s explanation, why could you not hear my son?”

Malcolm, realizing he would not be given the benefit of having an adult help him navigate the situation, did what any child would do and tried to explain that the officer was making a mistake.

When a third squad car arrived at the home and assessed the situation, the higher ranking officer can be seen and heard speaking with the responding officer and making it clear that there was no reason for Malcolm to be in handcuffs or in the back of the squad car.

He ordered him to be removed, but by then the damage had already been done. Malcolm had the traumatic experience that many young Black children, especially young Black boys, know all too well. Even though he was in no way involved in any criminal activity, complied with requests from law enforcement, and did everything he could to ensure the officers did not feel threatened by him, he was not given the same compassion.

Instead, Malcolm was humiliated. The incident occured in front of his neighbors in broad daylight,  at his home which is supposed to be his place of safety. This trauma is one that he and his family will remember moving forward.

“You stole his voice, because you viewed his words as him running his mouth. This morning, we don’t come to steal anything from you. We first come to give you forgiveness and to publicly say you are forgiven. We also come today to say that while your actions were for 34 minutes, your impact is for a lifetime. I come to take back the power that was taken from my son that day and be a voice for the mothers and fathers that felt like my son when he said to me, ‘Mom, there was nothing else that I could do.’”

The Fuquay-Varina Police department shared in a series of Facebook posts that the incident is under review and tried to justify the officers behavior by citing several statues that allow for minors to be detained with probable cause. The post stated,

“This is an ongoing investigation, and we request an opportunity to investigate this fully before everyone forms an opinion. We genuinely care about our entire community and regret when situations occur when anyone is impacted negatively during investigations.”

However, this “care” for the community and “regret” for this “situation” is not displayed in their actions that continuously demonize and adultify Black children. Malcolm was not just negatively impacted but rather told from this experience that he is unable to engage in something as simple as his childhood hobbies for fear of being criminalized. Unfortunately Malcolm’s story is not exceptional, it is a part of a larger system and foundation that criminalizes Black, brown, and indigenous youth, upholds white supremacy, and creates the conditions for police brutality to prosper without accountability.

“You cannot ask us to trust the police department to police themselves if we cannot trust them. We’ve talked enough. Now it’s time for the Fuquay-Varina Police Department and its chief to put some action behind their sentiments. Cops are afforded a nearly unlimited amount of discretion on the job. The officer could have easily used his discretion to afford Malcolm the same rights as the white teenager present. That lack of discretion is unacceptable.”

Blagrove created a list of concerns, grievances and demands in response to the event that are listed here:

Grievance 1: Unnecessary and corrosive actions taken by the responding officer

Grievance 2: Improper handling of the situation by the responding officer

After deliberation, the family demands the following:

The family and community leaders are also demanding an opportunity to have ongoing meetings with the police chief and city council to implement the requested policy changes and be involved in their fair and equitable application.

Nearly a month after the incident, Ty Ziglar noted for Wake County News, that their lives have changed as they replay the traumatic incident each day. Bill Harris, Fuquay Varina commissioner, stated that the town’s board of commissioners has passed a resolution to have a public safety committee meet and develop recommendations to help improve relations and examine police practices. Their goal is to have input from both the community and the police.