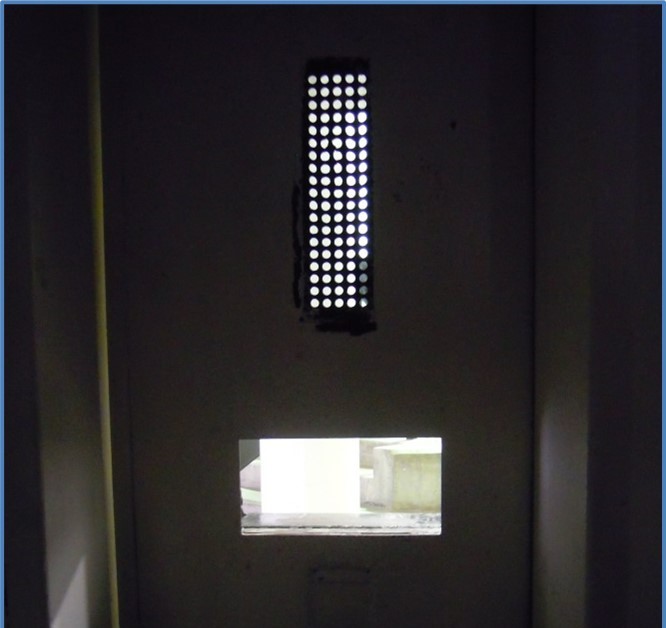 If it wasn’t heartbreaking, it would be funny.

Two weeks ago, the North Carolina Department of Public Safety, through its unironically named research unit, the “Innovation Institute,” concluded:

there is a body of research that indicates just how adverse restrictive housing can be for people who suffer from a mental health disorder. We now have data, which came from our own offender populations, to guide us as we determine best practices.

No shit. The damage of solitary confinement has been common knowledge among advocates, mental health professionals, human rights scholars, and anyone with common sense for more than a decade. As Jeffrey Cobb stated in his interview with Emancipate NC Advocate Cierra Cobb last week: “There shouldn’t be no solitary confinement, because you don’t do that shit to humans.”

And NCDPS has been aware of this “body of research” for years, as well.

In 2014 — seven years ago, and three years after UN Special Rapporteur on torture, Juan E. Méndez, opined that solitary confinement amounted to torture — I, then an attorney at North Carolina Prisoner Legal Services, collaborated with the UNC School of Law Immigration & Human Rights Clinic students and Professor Deborah Weissman to author a report entitled, “Solitary in Confinement as Torture.” This report was based on North Carolina-specific data, including public records obtained directly from NCDPS and its own incarcerated population. The report stated:

Studies demonstrate that isolation can cause people to become more impulsive as a result of the change in brain functionality attributed to isolation. When placed in solitary confinement, many [people] meet their breaking point. They cannot mentally handle the conditions and end up engaging in self-mutilation and/or attempting suicide. … It is a standard psychiatric concept; if you put people in isolation, they will go insane.

NCDPS was aware of this research and this report.

NCDPS was also aware of United States Congressional hearings about the adverse effects of solitary confinement on mental health in 2012. They were aware that those hearings picked up again a couple years later; I offered testimony from the deposition of Jerry Williams in Williams v. Wellman, a 2013 federal lawsuit against NCDPS. I filed the lawsuit after Jerry had spent over 70,000 hours locked up due to disciplinary action for behavioral manifestations of his schizophrenia. Jerry testified in that deposition, in a room inside Central Prison with NCDPS officials and attorneys present:

Question:    What does it feel like to be locked inside a cell on Unit One [the solitary confinement unit at Central Prison in Raleigh, North Carolina]?

Answer:      The first time you get locked up, it about drive you wild.  You want to do anything to get out, even kill yourself.

Question:    And how long have you been in segregation now?

Question:    What do you do all day in the cell?

Answer:      Best thing I know to do, walk back and forth on the floor, pace the floor.

Question:    Do you think you’ll ever get off lock-up [solitary confinement]?

Answer:      If I can stop getting write-ups, I believe I can make it.  But I just [have to] stop having to kick on the door or keep calling and begging for them to come and see me and talk to me.  I’ve got to leave all that alone.  That’s the only way to get off lock-up.  You don’t bother no staff or inmates.  You just stay quiet, don’t be asking nobody for nothing.  Don’t never even hear you talk.

NCDPS was aware of the “research” over the course of multiple other lawsuits, from every possible angle and theory of law, with various nonprofit organizations paying thousands of dollars on correctional and psychological expert witnesses to “prove” what all of us always knew was true.

The fact that NCDPS has ignored the truth about solitary confinement for so long, and continues to hold human beings in tortuous conditions that undermine the safety and security of prison facilities, reflects the agency’s incompetence and depraved disregard for the humanity of the individuals in their care. The fact that NCDPS has gotten away with it in front of countless judges, in venues ranging from federal district court to Superior Court to the Industrial Commission, reflects the utter impotence of our legal system to enact substantial justice for oppressed people.

I do not say these things lightly. I say these things after engaging in ten years of prison advocacy, advocacy that has damn near broken me a few different times. For instance, there was the day in 2014 when I woke up, all set to go on an inspection of a solitary unit at Central Prison, but I could not get out of bed. I ended up on mental health disability leave for three months, while my teammates continued on without me, and while my clients continued enduring the torturous conditions that we could not convince any decision-maker to end, despite the “research.”

There might have been a time when I was ashamed to talk about this. Not now. I know very well what conditions are tolerable for human beings to endure and I will not be gaslighted into thinking otherwise, no matter what fancy name-change NCDPS affixes to their solitary cells this year or the next.

The secondary trauma of solitary confinement is significant enough that it burns out correctional officers; it burns out correctional psychologists, doctors, and nurses; it burns out prison chaplains; and it burns out attorneys and advocates. Secondary trauma is emotional duress experienced by someone as a result of prolonged exposure to the details of another person’s traumatic experience. The symptoms include: feeling numb, feeling overwhelmed, feeling hopeless; having low energy; having low professional morale, diminished concentration, diminished cognitive function; experiencing trauma imagery; becoming emotionally unavailable; engaging in self-destructive coping mechanisms.

I do not know any attorney, paralegal, organizer, therapist, pastor, or advocate working in fields related to criminal justice, prison conditions, immigration, etc., who does not grapple with the effects of secondary trauma. Our legal system is systematically harming every single person who comes into contact with it, including judges and prosecutors and police. But, first and foremost, it is devastating the individuals who are over-policed, over-charged, over-prosecuted, over-sentenced, and over-incarcerated.

For NCDPS to release this press release without acknowledging their persistent and willful disregard of the “research” over these last 10 years is trash.

Jeffrey Cobb has spent over a year in solitary confinement. In his interview, he shares the way that solitary confinement leads to folks “hearing voices” and doing “anything to get out,” and how chronic staffing shortages in solitary units means that people do not always get cleaning products for their cells or out-of-cell time for recreation and showers. He stated:

Well, being that they are short of staff and they really can’t tend to your needs. There’s really not too much I can say about that, if you need some help, they don’t give us no attention, so of course they don’t give us anything we need. No rec, no proper treatment with Medical. So it’s leaving a lot of guys suffering.

The staffing shortages in North Carolina prisons persist, in part, because it is a very hard place to work with low wages and challenging working conditions. The current vacancy rate for correctional officers is 30% and for nurses is over 27%. The conditions burn people out and if they can, they leave.

The prison population substantially diminished over the course of 2020-2021, from around 34,000 individuals to around 28,000 individuals, which takes some pressure off staff. This was the result of the prison COVID litigation, NAACP v. Cooper, a Herculean joint effort between Emancipate NC, the ACLU of North Carolina, Forward Justice, Disability Rights North Carolina, and the National Juvenile Justice Network, which required every bit of the talent, energy, and time of 12-16 attorneys and paralegals spending most of their pandemic work-at-home days on the lawsuit. It settled in March 2021 for the early release of 3,500 individuals. Ultimately, over 4,500 individuals went home early.

But life for those who remain inside is intolerable. Excess deaths during the pandemic were massive, including one of the most heartbreaking prison suicides I’ve heard about. People in prison, many of whom have poor health and chronic care needs, cannot get treatment due to lack of medical staff and lack of quality assurance policies to track follow-up care. NCDPS is exempt under state law from medical accreditation processes that might require them to implement such policies, which exist for state psychiatric facilities and federal prisons. NCDPS signed a settlement agreeing to provide treatment for Hepatitis C, a huge public health issue, with ramifications outside of prison walls, as well as inside. Nevertheless, I have multiple state employee sources to state that the treatment regime is not currently compliant.

Today, people remain warehoused in solitary confinement conditions, even as Commissioner Ishee concedes that it would “be better to give them the help they need.” Our client, Ashlee Inscoe, an intersex woman who is biologically female, remains housed at a men’s facility, where she is repeatedly subjected to sexual harassment, cross-gender strip searches, constant misgendering, and the risk of sexual assault. Commissioner Ishee knows this and has the power to transfer her to a place where she could be more safe. He has not done so.

This is a personal essay and I apologize for the indulgence. I don’t typically write in the first person on this blog. But reading the NCDPS press release actually made me cry with rage. I cried because I have seen these prisons and I have seen these solitary units. I have talked to people living there and I heard their trauma and their pain and their frustration. I have visited most of the 56 prisons in this stupid over-incarcerating state, including four prisons during the pandemic, where I interviewed people suffering with COVID and without health care and where I caught COVID myself. I cannot share with you what I witnessed there because of a confidentiality agreement. I can tell you that when I exited Pender Correctional Institution on January 12, 2021, I vomited and my entire body convulsed as it attempted to expel the trauma I had witnessed.

After ten years, I have read thousands of letters from people in prison and I have seen the same verbatim grievance response stamped on hundreds of pieces of paper:

When you treat people with this level of contempt, they will fight back.

At Emancipate NC, our gloves are off.