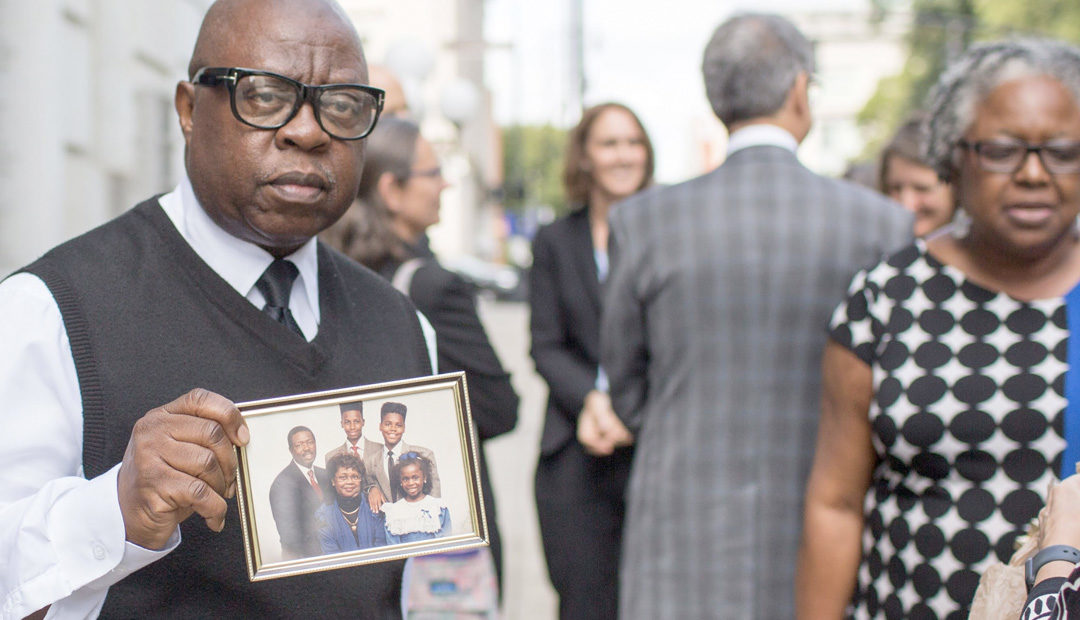 In 1997, Tilmon Golphin was a 19-year-old child. (Above, Tilmon Golphin’s uncle holds a childhood photo of Tilmon and his family). No different from the ones parents cry over as they leave for college. Friends and family use words like “quiet,” “easygoing,” and “peacemaker” to describe him. At 19, Tilmon read the bible daily but was also studying and learning the Rastafarian religion. At 17 years old, Tilmon moved in with his grandparents in South Carolina to help care for his grandmother who had suffered a broken hip during an accident. He was an exceptional caregiver, despite his tender age, and developed a close relationship with his grandmother while helping her regain her strength.

Tilmon had a traumatic childhood. He was abused at the hand of both his mother and father. Despite trauma and abuse suffered during early childhood and adolescence, Tilmon found some stability with his grandmother. He found himself surrounded by family who offered normalcy. He often visited his Aunt Marvel, an elementary school teacher, when he wasn’t tending to his grandmother’s needs. Aunt Marvel described Tilmon as a respectful boy who she never saw angry, upset, or violent. She trusted him so much that she would call on Tilmon to babysit her two children. Children are resilient. Children have the capacity to absorb unimaginable amounts of trauma, but still be incredible people. By all accounts, in 1997, a 19-year-old Tilmon was a child who had suffered some hard knocks but was rebounding and finding his way. Until his life crossed paths with someone who decided to be a judge, juror, and potential executioner.

Much like George Floyd, Breonna Taylor, and too many others to name, Tilmon crossed paths with a law enforcement officer who did not value Black lives. North Carolina state highway patrolman Lloyd “Ed” Lowry technically stopped Tilmon and his brother for not wearing seatbelts, but what any Black person reading this knows is that the boys were really pulled over for driving while Black. (1) Being Black in America means you are in a constant state of fear when interacting with law enforcement. That fear was especially palpable in 1997 because it was only a few short years after the officers who brutally beat Rodney King were acquitted. (2) The world watched Los Angeles burn with the pain, fear and trauma caused by America turning a blind eye to state sanctioned violence against Black bodies… again. Every generation has a reminder that state sanctioned violence against Black bodies is not only acceptable but celebrated in American culture. For the baby boomer generation of Blacks it was the murder and acquittal of the murderers of Emmitt Till (3) that forced them to confront the reality that they knew… Black lives don’t matter to America.

“I CAN’T BREATHE!!!” The words Tilmon’s 17-year-old brother, Kevin, was screaming while Trooper Lowry pinned him to the ground, and Deputy Hathcock sprayed Kevin’s face with mace. Watching his brother being unfairly brutalized at the hands of a law enforcement officer, for no other reason than they were Black, Tilmon had an unthinkable decision to make. Does he watch his brother die or does he do something… anything… to save his life? In this position, what would YOU do? Tilmon did what anyone would do. Tilmon did what every person in America has a right to do… protect the life of a person in danger of being murdered. Had he allowed his brother to be killed, Kevin may have been that generation’s Emmitt Till or Rodney King. In this situation, a Black person has two choices… accept the dehumanization and become a cautionary tale or fight back and be fed to the system. America does not actually believe that Black Lives Matter. If it did, saving his brother’s life would not have meant that he sacrificed his own to the biased, racist criminal justice system.

Black man kills cop. For many, that is all the information needed to determine the good guy and the bad guy in the story. The basic presumption that all law enforcement are good must be fundamentally challenged. That is not to say that law enforcement cannot be good, but the idea that they are inherently good feeds the institutional and systemic racism that makes our justice system so biased. Justice should be blind. All actors in the justice system should be evaluated with the same level of scrutiny.

But, that is not what happens when a person defends themselves or someone they love against a law enforcement officer. If law enforcement officers were treated with the same level of scrutiny as everyone else, the officer who killed George Floyd would not have been on the streets because of the 17 grievances filed against him prior to Floyd’s murder. (4) Trooper Lowry had recently been demoted because he used excessive force and used poor decision-making while on the job. This information, however, was never heard by Tilmon’s jury because the system is designed to promote the narrative of police as good guys. The system is designed to protect the reputation and image of state actors. Had Trooper Lowry been treated with the same scrutiny of a lay person, he would not have been reinstated to his position of power and instead, would have been fired. He would not have been able to instigate an interaction with Kevin and Tilmon that fateful day in 1997 and everyone would have survived. Had the jury been allowed to know that Tilmon and Kevin were justified in fearing for their lives at the hands of Trooper Lowry, maybe they would not have been sent to death row. Our justice system is not blind or fair. State actors get the benefit of being honest, good, wholesome, without fault while Black people are met with the burden of overcoming a presumption of being born criminals. All state actors and systems get the benefit of being fair and just. Despite how many times we see that many state actors and all state systems are anything but fair or just, they still get the benefit of the doubt.

In this moment in American history, it is time to look at the system and its actors with the same objective, discerning mind that we use to tell Black Americans to “wait for all the facts” before determining that state sanctioned violence is racially motivated. In Tilmon’s case, for example, would anyone objectively believe that white 17- and 19-year-old boys should face the death penalty? Would anyone have moved the case of 17- and 19-year-old boys to Johnston County if it were a place that pridefully boasts about being a county committed to terrorizing white bodies? Would anyone have stood for white 17- and 19-year-old boys being rushed through the criminal justice process, from arrest to a death sentence, in less time than it takes for a mother to carry and deliver a child? If we are “waiting for all the facts” before casting judgment, the answer to all of these questions is no. The Racial Justice Act, for a brief moment in North Carolina history, allowed for the institutional and systemic racism to be put on trial and treated like the silent witness that it is for Black people impacted by the criminal justice system.

Today, the North Carolina Supreme Court has breathed life back into the Racial Justice Act and once and for all removed Tilmon from death row. The court affirmed today that racism and bias has no place in our judicial system. This is a big step towards equity, but only one. Let’s work together to dismantle a system rooted in racism and create one that is equitable and fair for everyone. Let’s work on creating a system that would have condemned the state-sanctioned violence that killed Breonna Taylor and stole a lifetime from Tilmon Golphin.